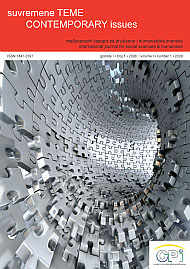 Summary/Abstract: This paper seeks to clarify conceptual and practical differences between the empire and imperial structures and the state and its determinants. The empire is historically and geographically differentiated and then interlinked with the concept of hegemony. Finally, a possible analytical framework for the research of empire is given. This framework consists of a brief description of fundamental factors and traits that constitute the empire as a distinct subject of political science research.