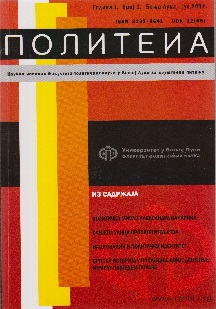 Summary/Abstract: The autor in this work starts with a thesis that a Serb people during last two decades of their history, or at the pass from the 20th to 21st century, experienced several historical debacles, firstly on the political field, what is most obvious in the fact that during that period, Serbs had lost several states that they were building, treated like and loved as their owns, in a series of civil wars caused not with their intention: SFR of Yugoslavia, FR of Yugoslavia, Serbia and Montenegro, Republic of Srpska Krajina, left many teritories trying to save their own lives and their biological existence, and there where they remained, instead of a constitutive people they became national minorities which gravely fight for their basic human rights. A Serbian defeat is also a fact that by numerous foreign autor(itie)s Serbs were collectively recognized as a criminal, genocide and tribalistic people, unworthy of history, that, for the purpose of their cultivation, must be collectively punished, reeducated, what is best instrumented with the Tribunal in Haag (ICTY) with its policy of indictments, trials and condemnations of Serb well-knowns from all Serbian lands, what had a negative influence on that's people moral and selfrespect today. The only bright spot in the dark of Serbian defeats and negative balance in their history is Republic of Srpska, which was made by will, contumacy and selfsacrifice of Serbian people in BiH. Both, victory and defeat requires multidisciplinary and multiperspective approach and valorization.