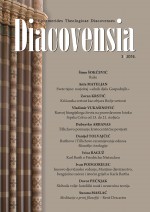 Summary/Abstract: In current discussions on religious freedom we often lose sight of the fact that it is one of the fundamental human rights on which the Catholic Church in a special way reflected in the Second Vatican Council’s Declaration on Religious Freedom Dignitatis Humanae. The focus of the article is not so much on the origin of this document as it is to show its importance for current discussions on this very important topic, starting from the understanding of religious freedom as it is presented in the document. The author also speaks about the importance of the new translation of the concept of religious freedom, and makes special reference to the debate on religious freedom in the United States, in the context of the recent dispute between the U.S. Administration and the Catholic Bishops.