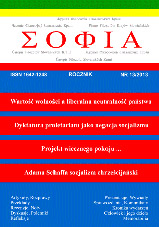 Summary/Abstract: The article is dedicated to the philosophy of Hassidism, which originated in Volhynia, Podolia and eastern Galicia in the 18th century. ‘Transforming the Kabbalah into ethos’ can be regarded as the most distinctive feature of this philosophy. For the Hassidic thinkers created their own anthropological and ethical system, using theosophical and ontological concepts of the medieval and Lurianic Kabbalah. They stressed the role of man in the everlasting and continuous process of creation. In their thought, the condition of God as such and His well-being are completely dependent on human actions and deeds, because it is God himself who needs human help to be redeemed, by returning to Himself from His exile.