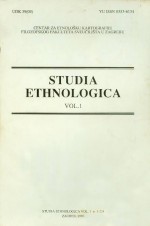 Summary/Abstract: The theme of this paper is an extension of Katičić's study "Hoditi-roditi" (Walk-Give Birth) and its aim is to show a number of similarities between a reconstructed old Slavic deity of vegetation and a recent popular belief in the Near East in el-Khader, "the Green". El-Khader is a deity of vegetation; he is called "the Green", he is always on the move, he rides on a white horse, walks over the sea, his sanctuaries are either in oak forests by water or on hills, he brings rain and protects the wounded from arrows. El-Khader-s significant features can be recognized not only in the cults of the Phoenician deities of vegetation, Adonis and Baal, but also in the ancient Egyptian (Oziris), Babylo-nian (Tammuz) and Sumerian (Dummuzi, Inanna) cults. Regardless of a possible, and likely, influence of the religion of horse-breeding invaders from the north, who are very similar to Indoeuropeans (the figure of the thunderer on a horse), the explanation for the above-mentioned parallels should be searched for in the most ancient periods of plant cultivation, on the very threshold of agriculture.