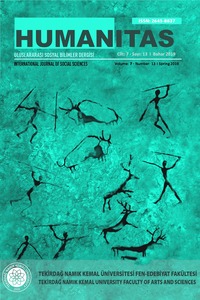 A.R. Penck Eserlerinde Türk Petrogliflerinin İzleri
The Traces of the Turkish Petroglyphs in the Works of A. R. Penck

Summary/Abstract: Through the data that emerge with this research, under the example of A. R. Penck, it has been aimed to reveal that the modern Western art was shaped also by those mysterious documents that reflect Turkish culture. In this study, the works of the Neo-expressionist artist A. R. Penck are chosen among a few artists who had adopted the same style, and the Turkish cave paintings and stamps alongside with the artist’s works have been comparatively scrutinized. To give an example out of the signs and illustrations that he had used in his works, it is seen that he had used many symbols in accordance to his artistic style that belong to Turks such as Kün-Ay stamp, the four arrow sign, the single dot inside the circle that indicates that an oath has been taken, countable stone symbols of planets, shaman and tengri figures.