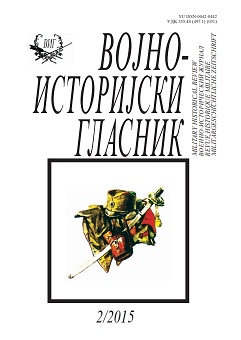 Summary/Abstract: By the “R-41” war plan the 5th Yugoslav Army had the task to defend the 400 kilometer-long front on the Bulgarian and Romanian border from the village Žeravino (near Kriva Palanka) to the village Brnjice on the Danube river (east of Golubac), with the goal of providing the necessary time for the armies on the northern and northeastern front to withdraw. Due to great length of the front, the Army had to put all available forces on the border, which took cordon disposition and left without any reserve. The main German attack took place on 8 April 1941 in the direction of Niš, when the 1st Armored Group (the 11th Armored, the 294th Infantry, and the 4th Mountain Division) attacked the Yugoslav “Toplica” Division. After breaking through the front, the Germans continued advancing, and in the next few days captured Niš and penetrated the valley of Velika Morava, surrounding left-flank units of the 5th Army, while troops from its right flank were withdrawing to the west. The Yugoslav High Command tried to stabilize the southeastern front by reinforcing the 5th Army with the 2nd Cavalry Division, which was on the march to the 6th Army, and then with “Cer” Division from the strategic reserve. These units, together with various remaining elements of the 5th Army, managed to form a new defensive line and close all avenues of approach which led to the valley of Zapadna Morava. However, despite a brave and strong resistance, these units shared the destiny of other formations of the Yugoslav Army: after capitulation, their soldiers were disarmed and marched into captivity.