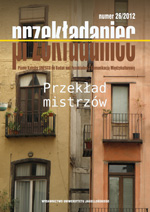 Summary/Abstract: Irena Tuwim is one of the very few Polish translators who are recognizable by large readership. What is even more remarkable, she achieved this success as a translator of children’s literature. Although she is known above all for the Polish version of A.A. Milne’s Winnie-the-Pooh books, generally considered her greatest accomplishment, in fact she translated many other children’s books, among them such classics as the Mary Poppins saga, Edith Nesbit’s books or H. Beecher Stowe’s Uncle Tom’s Cabin. This article first briefly outlines Tuwim’s apparently transparent, yet surprisingly elusive biographical vicissitude, then examines her translation strategies. It is not easy to decide whether Tuwim’s versions may be defi ned as free translations or adaptations, but a detailed analysis of her method clearly shows that her choices were based on a very incisive study of the original text. Although not without occasional minor errors, her translations are exquisite examples of stylistic mastery that enriches the target language.