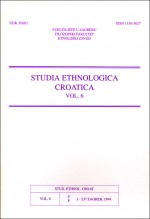 Summary/Abstract: The first part of the article explains the difference between two expressions: "I am dressed up in Šokac costume" (spremila sam se u šokačko) and "I wear Šokac costume" (nosim se šokački). The first expression means that a person is dressed in the national costume characteristic for Šokci (Croats native to the eastern part of Croatia, around the cities of Slavonski Brod, Vinkovci, Županja, Našice, Đakovo), while the second expression means that a person wears the national costume daily, although modified to include some degree of city clothing. The article is based on field interviews in 1993/94 in villages near Županja (Bošnjaci, Cerna, Drenovci, Račinovci, Vrbanja, Štitar), which sought to learn more about the Šokac national costume in that region. Many authors have written about the Šokci, in particular about the etymology of the word or about the origin of the group, using mostly historical and linguistic sources (Sršan, Stjepan 199). In this region, where Šokci live intermixed with other Croats as well as with some minority groups, the term Šokac at the beginning of the 20th century always referred to Croats who were both Catholic and peasants and whose families had long been settled in the region (starosjedioci). The results of the current research point to the two meanings of the above-mentioned expressions, and shows that the phrase nosim se šokački, that is, I wear Šokac costume, is an outer sign of the wearer's identity, even up to the present day, to differentiate the wearer from others who also wear the costume. In the 1950s alongside the first meaning, another, new meaning gradually came into use, expressed as spremila sam se u šokačko, that is, / dressed up in Šokac costume. This latter expression means that the person only sometimes wears the local costume. She may or may not be a part of the Šokac community. Those women who are Šokice may or may not still be employed in agriculture, and in fact can live in either rural or urban areas. The second part of the article gives the preliminary results of research of women's Šokac costumes of Županja region. The terminology of basic parts of the costume, of clothing and head arrangements are indicated in the tables. The terminology differs between the area west of Županja on the one hand and that east of Županja on the other. This field research will be continued, the tables will be completed with other data and will be expanded to include the remaining places so that we may acquire a regional picture of Šokac costume.