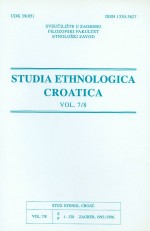 Summary/Abstract: At present, very often extensive research has been put on the traditional forms of stock breeding on the South Slav expanses (cattle raising and sheep breeding, with goat breeding in earlier periods, being of the greatest importance), the emphasis has mainly been put on the various ways of ensuring grazing on the season pastures. The study has been made of the observed differentiating elements, starting with the organisation of getting onto mountain pastures, with the organisation of life and work on them, all the way to the home villages and the distribution of the income. The research performed with this aim has been dependent on natural, physical and geographic characteristics of the terrain which was making the forms of transhuman cattle raising possible as well as on the cultural and historical circumstances.