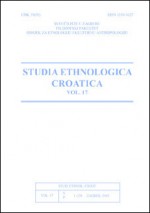 Summary/Abstract: The article gives a brief outline of the two attempts of revitalization of textile handicrafts in Croatia: first example is the nongovernmental organization 'Ruta' from the Island of Cres, which was founded in 2000 and which is using the wool of the sheep from the island, which would have otherwise been discarded and burned down, to make felt souvenirs. They have used the knowledge of the older inhabitants of the Island of Cres, and the available literature to (re)invent the technique of felt-making, with the final motif to increase the employment in the town of Cres and to, as is stated in the name of their organization, improve the quality of life on the island. The second example is a little company, called 'Baština' (Heritage) LLC, from the village of Koprivnički Ivanec, situated on the northern exit from the town of Koprivnica, in the north-western region of Croatia. They are focused on making souvenirs featuring a famous (in ethnological writings) red embroidery found on the traditional costumes of the rural population of the region, with the intention to preserve it and increase the interest of the local community for its production. Their main goal is to make the embroidery items 'as close to original as possible'. In the conclusion of this article, the author is trying to point to some common elements of the two case studies and thus create a possible base for the analysis of the similar organizations and attempts of the revitalization of textile handicrafts today.

Reliquiae reliquiarum – mi prijašnji više nismo isti Reliquiae Reliquiarum: We are not the Same 2001 Izložba "Narodna medicina" u Etnografskom muzeju u Zagrebu i Etnografskom muzeju Istre u Pazinu The exhibition "Narodna medicina" at the Ethnographic Museum in Zagreb and the Ethnographic Museum of Istria in Pazin 2003 Propitivanje religijskog identiteta na primjeru Istre Some Aspects of Religious Identity in Istria 2003 Seljačka Sloga i narodna nošnja (u razdoblju od 1926. do 1929. i od 1935. do 1940. godine) Seljačka Sloga and the Folk Costume (in the period from 1926 until 1929 and in the period from 1935 until 1940) 2003 Narodna medicina kao predmet etnologije Folk Medicine as a Subdiscipline of Ethnology 2003
2023 © CEEOL. ALL Rights Reserved. Privacy Policy | Terms & Conditions of use
ICB - InterConsult Bulgaria core ver.2.0.1219