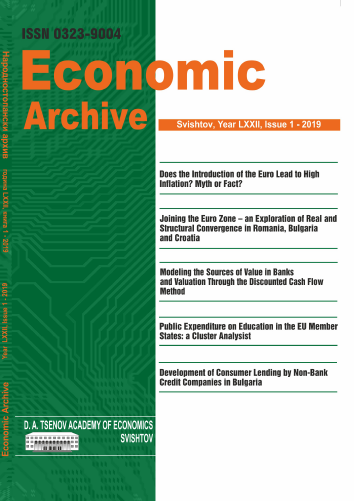 Summary/Abstract: Twenty years after the creation of the Euro Zone, the monetary union remains the subject of both academic and political debate, often focusing on non-EZ Member States and their monetary integration aspirations (or lack thereof). In this context, one of the many hurdles in the way of Euro adoption lies in the incomplete character of the sine qua non conditions expressed in the Maastricht Treaty, which, although the only set of convergence conditions expressed in the European acquis, are universally deemed to be insufficient for successful EZ membership. Consequently, these nominal convergence conditions need to be doubled by less transparent real and structural convergence conditions. It is the objective of this paper to analyse some indicators pertaining to real and structural convergence in Romania, Bulgaria and Croatia by focusing on key aspects regarding (1) the capacity to catch up with EU’s PPS computed GDP per capita mean, (2) specialization, (3) business cycle synchronization and (4) current account structure. While recognizing that these four elements are not sufficient to ensure successful EZ membership, including them as inputs in the Euro adoption decision making process would have beneficial impact on its efficiency.