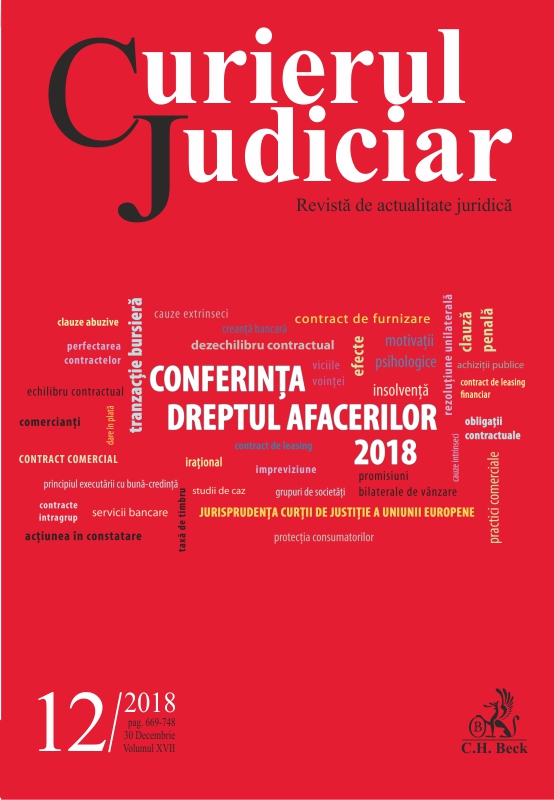 Summary/Abstract: The classification of the causes of contractual imbalance in extrinsic and intrinsic is of particular practical significance when it comes to the different legal regimes governing the two categories of causes. The category of extrinsic causes of contractual imbalance, arising from the original economic or intellectual inequality of the parties, or occurring in the course of business, independently of their will, brings to our attention the contracts of adhesion, i.e. legally speaking, the contracts that are non-negotiable. This category of contracts contradicts the French subjective thesis, of the autonomy of will, which considers the binding nature of the obligation assumed by a person to be the result of the „creative” will. It thus rather refers us to the objective doctrine of the common law, which speaks of the obligatory promises of the parties based on the negotiation of their interests (in exchange of consideration). The contract is, in these terms, the result of a (re) negotiation of interests (bargain), not of the parties’ mutual assent. In case of the contracts of adhesion, objectively unbalanced, the will of the parties is also missing or it is limited or altered due to the economic or psychological imperative of concluding the contract. The parties’ interests remain the subjective element of the contract, further justifying its performance, and as such assuming the existence of negotiations. Or, in the presence of an objective contractual imbalance, from the first and the last moment of performing the contract, it is the law that will ensure the parties’ re-negotiation of their interests, by way of the leverage effect. All consumer protection legislation rests on the leverage effect and, likewise, competition law, seeks to (re) establish economic power or competence balances between the economic operators. Problems arise, however, in situations which are not covered by the special legislation. For the law is, first, the one that should determine the binding nature of the assumed obligation (Article 1203 in conjuction with Article 1202 of the Civil Code), and rebalance the parties’ interests during the course of the contract and upon its termination (Article 1271, Article 1522 (5) of the Civil Code). In this regard, we propose to analyze the relevant general provisions of the law in terms of the leverage effect, as the remedy for the extrinsic contractual imbalances between the parties, distinguishing them from the remedies for the intrinsic imbalances caused by the defects of the parties’ will (e.g. Articles 1207, 1214, 1216, 1221 of the Civil Code), respectively by the insertion in the contract of exorbitant liquidated damages (Articles 1538, 1541 of the Civil Code).