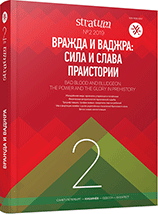 Summary/Abstract: In the late 13th — early 12th century BC, a fortified settlement was built in the very place, where the heart of the modern city of Nikolaev (Ukraine) is currently located. A set of tools and weapons was hidden inside or, maybe, next to a dwelling, and included a few socketed axes, a spearhead, and a razor- or saw-like blade tool. The authors present here, for the first time, a thoroughly documented description of the find along with the observations on artifacts’ morphology and systematics. The double-looped celt axes, as well as the spearhead, all seem to represent the North Pontic Late Bronze Age metal production. The single-looped celt axes are attributed to the Eastern Carpathians metal production; but then again, the long-lasting process of morphogenesis, that took its place during the spatial distribution of such axes, was closely related to the North Pontic area as well. Interestingly, the blade tool from the hoard, which was an innovation of the Middle Danubian origin, was also adapted to the local context.