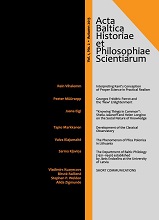 Summary/Abstract: In her analysis of the politics of biotechnology, Sheila Jasanoff argued that modern democracy cannot be understood without an analysis of the ways knowledge is created and used in society. She suggested calling these ways to “know things in common” civic epistemologies. Jasanoff thus approached knowledge as fundamentally social. The focus on the social nature of knowledge allows drawing parallels with some developments in philosophy of science. In the first part of the paper, I juxtapose Jasanoff’s account with the philosopher Helen Longino’s approach. Longino argued that objectivity of scientific knowledge is made possible by the social nature of knowledge production. In the process of community-wide discussion, claims that are not intersubjectively acceptable are rejected and communally acceptable knowledge emerges. Longino called this knowledge-creating critical dialogue transformative. I suggest that Longino’s account can be seen as providing epistemological support for the civic epistemologies Jasanoff described. They are capable of producing knowledge in the normative philosophical sense of the word to the degree that they are able to support this transformative critical dialogue. In the second part of the paper, I explore in the light of Longino’s criteria for effective knowledge-productive dialogue one of the controversies in biotechnology policy that Jasanoff analysed. I suggest that Longino’s criteria allow identifying some fundamental obstacles for initiating and maintaining this kind of responsive critical dialogue and that the controversy can be seen as caused by inability to overcome these obstacles. In such a case, the controversy signals an epistemic failure as well as a failure of democratic policy.