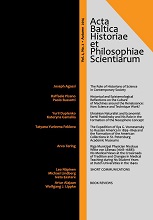 Summary/Abstract: The first building of the Royal Swedish Academy of Sciences was the observatory, built in 1753 (Fig. 1). When Hugo Gyldén was appointed the academy’s astronomer in 1871, he was granted 33,000 Swedish kronor by the Swedish government to upgrade the instruments and the observatory building. The most important instrument Gyldén ordered in 1875 was a 19-cm refracting telescope, made by Repsold & Söhne in Hamburg, with a focal length of 255 cm (Fig. 2). In 1877, the old original lantern tower was replaced with a more modern cupola to accommodate the new telescope (Fig. 3). To eliminate vibrations, the refractor was placed on a concrete pillar which ran through the whole building down to the basement.