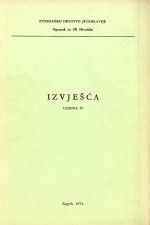 Summary/Abstract: In Graebner’ s "Methode der Ethnologie" the criterion of non-organic serves as one of the auxiliary criteria for detecting historical connections between two different cultures. If, in a homogeneous set of elements we find a heterogeneous one, i.e . incompatible or non-organic and can link it typologically to another set of elements to which it originally belonged we can boost of having discovered a piece of cultural history. However, though it has proved methodologically fruitful in historical research, Graebner’ s "atomizing" conception of culture which views it as a mere a mere aggregate, a sum of cultural elements would not rank very high with contemporary standards of scientific theory. Humane studies have all during the past decades switched from the positivistic notion of "fact" as the essential element of knowledge to the system of interrelations between facts. Though ethnology in particular lags somewhat in this general trend there is no real obstacle to the conceiving and studying culture in terms of the system theory. In accordance with these terms the criterion of the non-organic should be translated as the criterion of disturbance in a system. A number of cases in all branches of science show that the methodological significance of disturbances in the observed system can be enormous in the way that it can lead to discovering or reconstructing of another system . Disturbance is thus conceived as the area of interference of the two systems. This model can be especially fruitful and applicable in ethnology today when we are faced with rapid substitution of traditional cultural systems with the civilizatory ones.