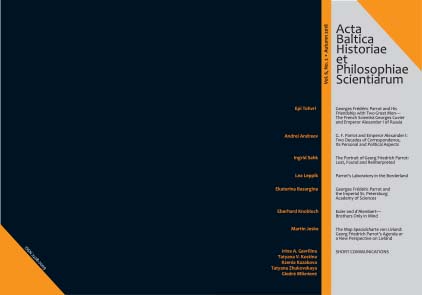 Summary/Abstract: This research is dedicated to F. M. Klinger, the first curator of the University of Dorpat. The paper explores his activity in Dorpat: what place did the University occupy in his life and how much did he contribute to its development. The study examines the nature of his relationship with the first rector G. F. Parrot and identifies whether Klinger and Parrot’s assertions about the concept of university were in essence similar. The research is based on materials of private correspondence, the memoirs of Klinger, Parrot and their contemporaries as well as some official documents. The relevance of the research stemmed from drawing attention to one of the first six curators of Russian universities—F. M. Klinger, whose personality and activity has not yet been the subject of a separate study.