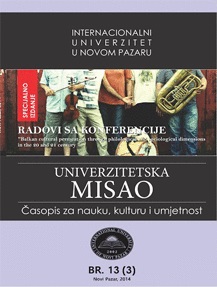 Summary/Abstract: The subject of this paper is a review of Abdagic’s artistic transposition of the Bosniak tragic in the novel “Fenix” in very complex social and historical circumstances in the Balkans from the time Ottomans left until the second half of the 20th century. The writer published the first part of Fenix (Sacir’s life before the proclamation) in 1971 and then the other part Fenix (Sacir’s life and the proclamation)was published in 1972. Abdagic considered this novel his lifetime best piece of art, which it definitely is having in mind the aesthetic qualities and reach of this enormous Romanesque structure which was shaped by modern stream of consciousness with notable psychological, philosophical, aesthetic and intellectual discourse. It is easy to notice the influence of Dostoyevsky, Proust, Joyce, Selimovic whom he all read with pleasure as well as Freud’s Psychoanalysis. Fenix is based on historical grounds, but it certainly contends to being labeled as a historical novel. Literary theorists will find traces of stream of consciousness, subjective psychological novel, novel about artists in this piece of prose. Nevertheless, Fenix represents a real refreshment and revelation of modern novel in Sandzak-Bosniak literature of the 20th century. The writer follows the story of Bosniak people and Sacir as the hero in the Balkans through four tumultuous stages: * The weakening and the end of the Ottoman rule in the Balkans * Kingdom of Serbs, Croats and Slovenes, i.e. Yugoslavia * The Second World War and occupation * Postwar communist-socialist Yugoslav restoration.