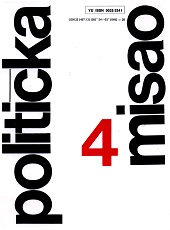 Summary/Abstract: The widely differing opinions voiced on the causes of the crisis in Yugoslav commonness are the result of different ideological tendencies. The author analyzes those views which seek the causes of the crisis in the constitutional model of Yugoslav federalism and argues against such concepts. The article points out to certain substantive deviations in the practical functioning and development of some institutions from their concept as defined in the constitution and considers them the main causes of the difficulties in realizing Yugoslav commonness. Detailed account is made of the reasons why the character of statehood of the constituent socialist republics has strengthened, why the notions of state and nation are being increasingly identified. The causes of group-property tendencies are outlined, with special reference to the problem of realisation of the constitutional concept of the federation. The conclusion is suggested that the main cause of the crisis of commonness lies in the growing tendency reduce Yugoslav federalism to relations among republic-states in the tact that almost all interests are mediated through the republican states, and in the failure to evolve in practice the constitutional model of association and linkage of different interests through self-management and without the mediation of republican states.