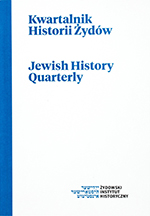 Summary/Abstract: Szmul Zygielbojm was a politician and a member of the Bund and its Central Committee as well as a councilman of Warsaw and Łódź. In 1940, he left occupied Poland and spent the rest of the war in exile – first in France and then in the United States of America. In 1942, he arrived in Great Britain, where he served as a representative of his party in the National Council of the Polish government in exile. For over a year he had devoted his energies to attempts to inform the world about the mass extermination of Jews. In May 1943, he committed suicide in protest against inaction of the free world in the face of the Shoah.In January 1940, as he departed Warsaw, Szmul Zygielbojm left behind his family: wife Mania, son Artur and a daughter from his first marriage, Rywka. Between 1940 and 1941, a separated family maintained correspondence. The presented letters were sent from Poland by Zygielbojm’s wife and two children. Unfortunately, there exists only one letter from Zygielbojm to his wife, the rest are missing. This emotional correspondence shows the drama of the family, but also allows one to have a look at Zygielbojm’s private life, thus complementing the politician’s biography. The Zygielbojms’ wartime correspondence is also an example of how letters can be an important source in the Holocaust research.