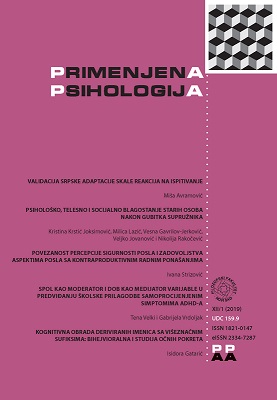 Summary/Abstract: The subject of this research is the psychophysical and social wellbeing of the elderly after the recent loss of spouse. The study of well-being in old age was carried out by comparing a group of elderly in grief (64 participants) and elderly that are not in grief (104 participants). The age in both of the groups ranged from 65 to 89 years. The results confirmed the existence of significant differences in the level of most of the examined well-being indicators. The differences in effect size are mostly small to medium. Old persons who have lost their spouses in the past two to three months exhibit lower life satisfaction and lower meaning of life, as well as lower levels of positive and higher values of negative affect, compared to old persons who were in marriage. Additionally, people in grief experience higher levels of loneliness, despite the higher perception of instrumental support availability. Contrary to the expectations based on some earlier findings, the differences in emotional distress and perceived health status between compared groups were not registered. Also, the groups compared did not differ in the level of resilience and perceived emotional support, while the differences at the level of functional status appeared. Grieving subjects appear to be functionally more independent than subjects that are not in grief. Gender differences in the group of grieving elderly were reported only in negative affect, which is more common in widows. Generally, the results are dominantly consistent with previous findings, but to some point attenuate certain specificities that may arise from some characteristics of grief and aging in our culture.