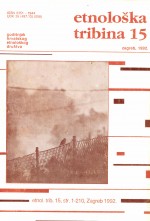 "Sve što smo imali, sve što smo bili, svelo se na uspomene". Osobne Pripovijesti i pisma prognanika iz istočne Slavonije
"All We Had, All We Were, Has Been Reduced to Memories". Personal Narratives and Letters of the Refugees From Eastern Slavonia

Summary/Abstract: Based on three personal narratives and three letters of refugees from war struck regions of Croatia, the author investigates how such accounts can be approached as ethnographic data, the structure and contents of these accounts reveal that the war and refugee experience have influenced the way the refugees see themselves and think about certain core values of their culture. The author brings some insightful observations about the war as a period of reversed order, about gradual transformation of the cosmopolitan attitude of the inhabitants of Vukovar, about photographs and other mementos saved from the family house, which is seen as an irreplaceable determinant of the identity of the refugees, and finally, about the iconography of the refugees' current living quartos.