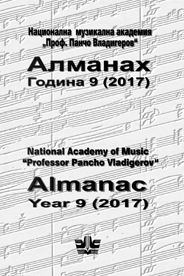 Summary/Abstract: These musings have to do with the suppression of certain processes related to the New music, in the legitimately regulated space of “official” culture, all part of the history of Communist era music administration and government. Main “heroes” of this study are the Committee for Science, Art and Culture (CSAC) and the Union of Composers, Musicologists and Concert Artists (UCMCA) renamed Union of Bulgarian Composers (UBC) in 1954. The authors, initially exposed to a “sharp critique”, are the first ones that turn modern art into a new, enclosed territory, also in the field of Bulgarian music. The emerging twelve-tone composition poetics is alien to the spirit of the “cultural flourishing” of social realism. It is an important subject not only to said organizations, that actually represent the censure. It is an important “subject”, provoking power and territorial claims of art. In addition to the official reactions towards twelve-tone music representatives as an object of censure, we must also add reactions to the music of Dimitar Nenov, partially Marin Goleminov and Boyan Ikonomov. After 1952, in party and official documents, including those of CSAC and UCMCA, two areas are outlined distinctly: social realism and “hostile” formalism. The entire power apparatus (CSAC, UCMCA, music institution government, professional committees attached to them, party organizations) persecute formalism. This change, which turns UCMCA and CSAC) into a “administrative network” structure, a unified mechanism, comes out as a result of a radical move. This is the change of the bylines of the Art Union in 1952; its work gets reorganized. The objects most discussed, as being an alien formalist art, leading do decisions of censure, are the works of Konstantin Iliev (First and Second Symphony) and Lazar Nikolov (Concerto for Orchestra, First Symphony and Violin Concerto). The “critics’” and “self-critics’” scenarios acquire a unique nuance in discussion of Bulgarian music. “Self-critique” even appears as an official feature, i.e., it is a natural continuation of totalitarian devices used to affirm social realism. On the other hand, various composers like Marin Goleminov and Boyan Ikonomov resent accusations of unreliability. As a highest form of resistance we must note the “refusal to self-criticize” of composers like Konstantin Iliev and Lazar Nikolov. This type of behavior bears witness to the authenticity of their protest.