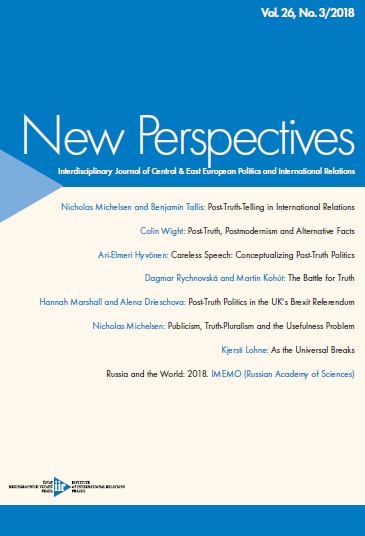 Summary/Abstract: The term post-truth became the 2016 Oxford Dictionary word of the year, yet many scholars question whether the term signals anything new, or whether post-truth is just lying, which has always been a part of politics and media. This paper contributes to this discussion by critically evaluating the extent to which the Brexit referendum, the UK’s vote to exit the European Union, was based on post-truth politics. The paper develops the argument that Brexit is a key example of post-truth politics, and that two key factors ushered in this new form of politics into the UK: 1) technological changes associated with social media, which lead to a situation in which a significant portion of the population acquire their news online, while anybody can post anything online without checks on the accuracy of the claims; 2) a growing distrust in democratic institutions, political elites, expertise, and traditional media gatekeepers which leads, in turn, to a loss of trust in established expert knowledge, leaving the population willing to rely on information originating from questionable sources. This combination of a decline in trust of politicians and experts with social media reliance, drove the British public to emotionally charged, value-based decision making to a greater extent than before, which thus supports the claim that post-truth politicsis indeed a novel phenomenon. Our analysis of the Brexit referendum raises the need for scholars to study the daily activities of the population and focus on its role as an active regime shaper.