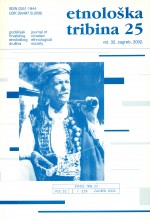 Summary/Abstract: The political and social turmoil, and the age in which the existing values are being questioned lead to the creation of some specific social phenomena. This paper shows the media context of the Rožman phenomenon, but also the individual testimonies of the members of this controversial movement, by comparing the social and the political situations in Croatia with the development of the Hare Krsna movement.