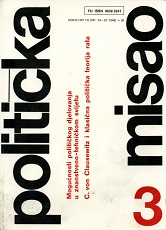 Summary/Abstract: Western culture is composed of two cultures: scientific¬ -technical and hermeneutic-political-rhetoric culture. They differ in their respective concepts of rationality, types of cognition and activity. Scientific-technical culture entails the logic of identity, resting on the identification of intellect with the principles underlying its constitution and the procedures o f their operation. Hermeneutic-political-rhetoric culture, on the other hand, does not involve the logic of identity but the logic of differentiation. The logic of this concept of rationality was developed, at least in principle, by Kant in his Critique of Judgment. The relationship between these two cultures, between their concepts of rationality and types of knowledge, has not always been a balanced one, though there has never been absolute domination of one culture over the other. The appearance of two concepts of rationality and two types of knowledge in our culture is the response to the suppression of one type of activity by another. The fundamentalist absorption of one concept of rationality by the other results in a revival of the ritualistic mentality.