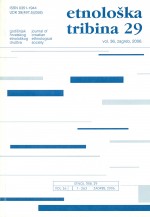 Summary/Abstract: From 1892 to 1954 more than 12 million immigrants entered the United States through its famous gateway, Ellis Island. They were processed through immigration procedure and majority of them, from that period, were allowed to enter the US and become the citizens of their choice. Poverty, scarcity and hard field labour forced many Croats to seek better life in America. Almost four millions of them went through the Ellis Island in the period from 1880 to 1930. Very young, of average age not more than 22, most of them single males, together with all other steerage passengers, underwent the quick medical examinations, "six seconds physicals" through which they were checked for signs of infectious diseases, insanity, "feeblemindedness" of physical defects. To avoid the trap of being too easily critical 100 years after Ellis Island happenings, it has to be said that they were a practical solution to immigration admission. The number of people entering the US through Ellis Island could reach 5000 up to 11000 people per day during America's peak immigration years from 1890-1924. However, Ellis Island practices legitimatized and deepened the division between the ethnically desirable (North and Western Europe immigrants) and less desirable (South-Eastern Europe and Asia). Furthermore, they provided a mass demonstration of power and political practices, which used health as an instrument of separation between those who were eligible to become the members of a politically stable, healthy labour force, and those who were not. This paper tries to examine in what way did such "segregatory" practices, which already at the entrance to the New World, defined Croats and other immigrants as possibly unhealthy, insane or inapt, influence the formation of Croatian Diaspora in North America as a culturally distinct ethnic group. It also raises the question as to how will the newly emerging medical borders affect notions of ethnicity and the ways in which dispersed/displaced peoples construct their identities in the time of "global ethnoscapes" (Appadurai) The fact that this first "legalized" segregation on the basis of a six-second medical examination was going on under the shadow of the Statue of Liberty, shows to what extent it was assumed as "scientifically" reasonable and politically correct, and explains the existence of its current practices of creating medical borders. Who remains on the other side of the medical border? The ethnical and cultural "Others", or, just "the ill"?