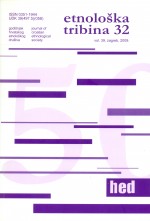 Summary/Abstract: This year Croatian Ethnological Society celebrates its 50th anniversary. The annual conference titled “Traditions and tendencies in Croatian ethnology: ethnology as an engaged and ethical science” (June 4-5, 2009) hosted the discussion we are publishing. The introductory article questions many ethical issues in different ethnological activities: concerning science and research, museums, conservation, archives, recording, representation, writing. What is specific about ethics in ethnology and do we need an ethnological ethical code were some of the issues opened at the discussion. Ethnologists Ljubica Gligorević, Sanja Potkonjak, Žarko Španiček, Luka Šešo, Jelka Vince Pallua and Željka Jelavić comment on the introductory text by Tvrtko Zebec.