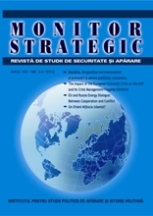 Summary/Abstract: The present paper aims to analyse the concept of the “security dilemma” through the lenses of two key theories for approaching and understanding international politics – namely, neo-realism and constructivism. While acknowledging the fondness of the pioneers of the concept for the neo-realist theory for which it subsequently evolved as one of the key elements, the paper further proposes and comparatively analyses an alternative approach shaped by the constructivist tradition. In this regard, it focuses on the manner in which the security dilemma emerges as a result of the social construction of world politics, the subjective understandings conceived by actors on the international arena and the ensuing perceptions about their counterparts and their actions, which in turn influence the former’s behaviour. The conclusion of this analysis is that the mainstream neo-realist approach provides rather limited insights into understanding the dynamics of the security dilemma and processes of threat perception, respectively. Subsequently, in this endeavour, the constructivist approach deserves further consideration, as it allows for a proper apprehension of the security dilemma through transcending its rigid understanding as an outcome of structure of the international system.