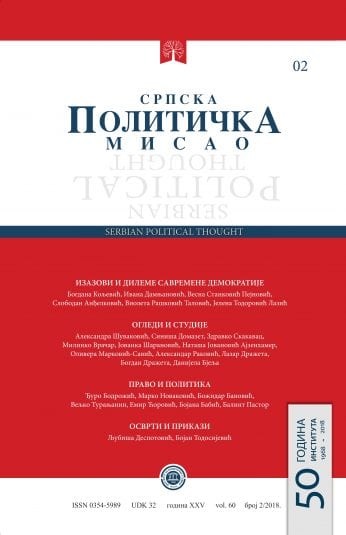 Summary/Abstract: 208 The subject of this paper is an analysis of the financing of the 2017 presidential campaign in Serbia. The aim of the paper is to ex amine the effects of public funding introduced in 2011, which led to a great dependence of political subjects on public sources and a great misbalance in the financial capacities between the ruling party (or par ties) and opposition. The paper put an accent on a particular form of deviation that characterizes Serbia after 2011: the financial supremacy of the ruling party and the complete dependence of political subjects on public funding. We used theoretical framework of cartel parties devel oped by Katz and Mair but we applied this approach bearing in mind local circumstances. These approaches indicate that one of the impor tant consequences of public funding is the emergence of the status quo in which the largest subjects work together and use public resources to ensure their own collective survival. Cartelisation of the party system can lead to the growth of populist and antisystem parties, which di rectly communicate with citizens, correcting in that matter mistakes of mainstream parties. We put particular focus on the influence of public funding on the disappearance of political subjects and the possibility of creating new ones. Analysis of the last four electoral cycles in Serbia shows that political subjects reported from 40% to 50% of revenues from public funding. Loans consist about a quarter of revenue on average, while their own funds (funds from regular work of political subjects) are on the rise after the law changes in 2014. In fact, revenues from public sources are more than we noted above because all approved loans in Serbian campaigns came from banks with local ownership. In addition, conditions for approved loans were significantly better than other com mercial loans (for other companies or private persons). As a rule, ruling parties in average spend the most in Serbian campaigns and we are talk ing about significant funds for local circumstances – more than three millions of euros per subject. In 2012, there was a balance in a certain way between ruling subjects and opposition in spite of the fact that ruling subjects spent more funds. After 2014 parliamentary elections, “progressives” as a ruling party became an absolute leader in financial capacities. This period is overlapped with their history electoral results. In 2016 and 2017, they spent much more money than other subjects or candidates together. The best example is 2017 presidential campaign when Aleksandar Vucic spent more than six million euros and in ad dition he spent for political advertising slightly more than other candi dates for all activities during the campaign. The most important results we obtained in paper are: 1) the existence of great dependence of polit ical subjects on public funding in election campaigns, 2) deepening the gap between the financial capacities of the ruling subjects in relation to the opposition, 3) the survival of the largest number of political sub jects despite small financial resources and 4) the proliferation of “soft“ organisations, such as political movements based on online campaigns. We concluded that there was no political pluralism in last three elector al cycles as a consequence of significant financial disparities between ruling subjects and opposition. Political subjects have survived that period but in the real sense they have no capacities for serious political competition and presentation of their policies. Due to small capacities of opposition for management of election campaigns, citizens do not have an opportunity to see both sides. Party life in 2017 is significant ly worse than five years ago when the new financial framework was adopted. One of the recommendations is to continue the monitoring of these trends and modification in legal framework if such negative trends continue.