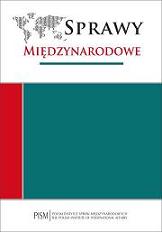 Summary/Abstract: Among the foreign policy priorities claimed by the Georgian Dream coalition, which has governed Georgia since October 2012, is integration with the European Union and NATO. Progress in negotiations of an Association Agreement with the EU seems to confirm this. The ruling coalition, however, has been criticised by the opposition United National Movement, which alleges the authorities are persecuting political opponents who served in the previous government under the guise of abuse of power. The possibility of selective application of justice has raised concerns also in EU countries. The opposition has also criticised the authorities for changing the foreign policy from Euro-Atlantic to pro-Russian. The new government in Tbilisi did announce its intent to repair Georgia’s relations with Russia is a priority. To this end, talks with the Russian side to open up the Russian market to Georgian goods and increase visa facilitation for Georgians travelling to Russia were initiated. Despite the apparent warming in relations between the two countries, however, a rapid resumption of diplomatic relations broken by the conflict of August 2008 should not be expected. Controversies arose around some statements by the head of the Georgian government, Bidzina Ivanishvili, concerning countries of the region, including his declaration that Armenia would be a model for Georgia to follow. Equally surprising was the Prime Minister’s expression of doubt as to the benefits for Georgia of participation in the construction of the Kars-Akhalkalaki- -Tbilisi-Baku railway connection between Turkey and Azerbaijan. Nevertheless, it is still not likely that the Georgian Dream coalition government will be able to change the shape of regional alliances as it is still conditioned by the geopolitical situation of Georgia.