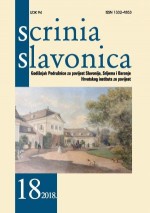 Organiziranje i djelovanje Jugoslavenske radikalno seljačke demokracije u gradu i kotaru Brod na Savi do općinskih izbora 1933.
The Organization and the Activities of the Yugoslav Radical Peasant Democracy in the City and in the District of Brod na Savi up to the Time of the Municipal Elections in 1933

Summary/Abstract: In this paper an attempt is made to reconstruct the process of the establishment of the Yugoslav Radical Peasants’ Democracy/Yugoslav National Party controlled by the regime in the district of Brod according to archival records and local newspapers. After the establishment of the dictatorship, all political parties were prohibited and local politicians willing to cooperate with the regime came to the fore. The dictatorship was formally terminated with the Octroyed Constitution and after the calling of parliamentary elections; subsequently the regime party was established. The supporters of the new party in the Brod area were extremely heterogeneous; from the very beginning this led to the establishment of two fractions, mutually exclusive and struggling for supremacy. What made the situation even more complicated was that Nikola Nikić, representative of the Brod people, had refused to join the party and that he, so to say, had switched to opposition to the regime. Under these circumstances Nikić’s former close confidant Tomo Kovačević, royal senator and head of Sibinj, became the most significant supporter of the regime. After the establishment of the dictatorship, almost all significant political positions in the city and the district were held by people who were close confidants of Nikić; hence a special personnel cleanup was considered necessary by the leadership of the new party. The most significant change was the establishment of a new city administration led by Henrik Duffek, the president of one of the party fractions. This initiative caused new problems because members of the other fraction were completely neglected and now, with the support of Kovačević, tried to place some of their own members in the new city administration. The leadership of the party repeatedly tried to unify the fraction; formally this was accomplished after the elections in September 1933. After that, although a unified organization of the regime party was established, differences still remained; this became evident at the municipal elections as most of the municipalities fraction lists were put up.