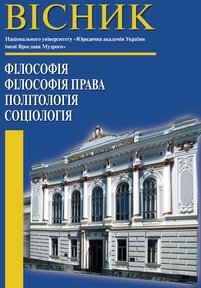 Summary/Abstract: Problem setting. The national security system of the state is a single complex of military-technical, informational, economic, social-political, spiritual and other factors. In particular, the spiritual security of society is the basis for preserving the statehood and prosperity of the nation in the global competitive struggle. In such conditions, the role and significance of the spiritual security of society is of particular importance for state-building and nation-building processes in modern Ukraine.Recent research and publications analysis. The issue of spiritual security has become the subject of scientific research in various paradigmatic measures. Thus, V. Baranivsky emphasizes that spiritual security is an important factor in the existence of a nation and a state, and neglect of it can lead to the collapse of the country. The scientist V. Klyus reveals the essence of threats in the spiritual sphere of society, classifying them into two groups: threats that endanger the spiritual world of man and threaten the stable functioning of all forms of social consciousness and mentality. A number of researchers, G. Sitnik, L. Belovetska, B. Bukrinsky, V. Stepanov, S. Ponomarevsky, and others, offer their own interpretation of the essence, functions and classification of national values as the basis of the spiritual security of our people at the present stage of the national state-building.Paper main body. Spiritual security of the society is directed at the protection of national values and development priorities, the mentally-civilized basis of the existence of the Ukrainian people, and the preservation of its cultural identity in the global processes of the present. According to V. Krutov, today Ukraine needs a fundamental and effective theory of ensuring national security through the prism of spirituality as regards individual citizens, people, society, and the state as a whole. Solidifying with the thoughts of the previous author, we note that in our time, any state should be prepared to withstand negative external influences, in particular, information attacks aimed at the spiritual sphere of society's life. According to experts, the first group includes the danger of the destruction of the spiritual world of a person threatening the formation of her consciousness, ideological foundations, freedom of thought, beliefs, intellectual activity. The second group is a threat to the well-established functioning of all forms of social and mass consciousness and mentality.Conclusions of the research. The spiritual security of Ukrainian society is the key to preserving the national identity of our people, an important factor in building a modern democratic, European state. The spiritual security of Ukrainian society is based on national and universal values and aimed at protecting the national and cultural subjectivity of our people.