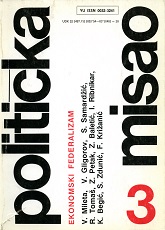 Summary/Abstract: In theoretical discussions the concept of sovereignty relates exclusively to political communities and denotes the highest, indivisible and inalienable power at their disposal. In discussions in Yugoslavia the expression »economic sovereignty« extends the use of this concept into the economic sphere. Since sovereign power requires someone to sustain it, namely a sovereign, it cannot be depersonalized; the author therefore tries to establish the consequences (for the economic relations between federal units) of the fact that — in the constitutional arrangements of 1974 — sovereignty does not have a real subject to sustain it. Unable to discover a concrete subject of responsibility the author concludes that this is the consequence of deriving the concept of sovereignty from that of nation. A federal system based on relationships between nations can easily turn into an autocratic system. Only two ways of limiting the consequences of the sovereign power of a nation or of a constitutional person are historically known to exist — parliamentary government and a federal system of state government.