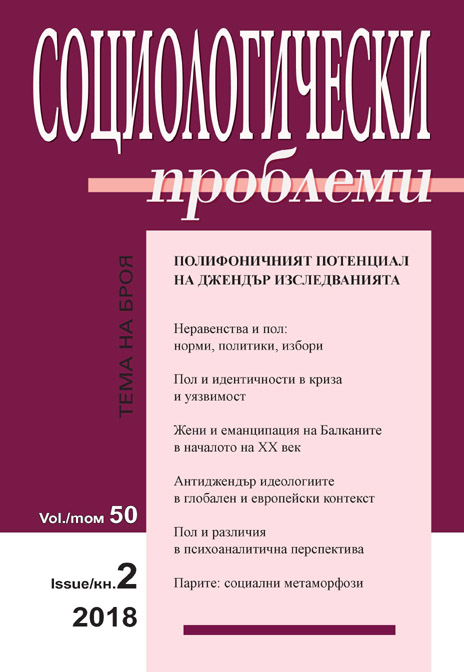 „Дайте ни мъжете, пуснете ги да си дойдат и те ще ни намерят всичко, което ни трябва“ – Първата световна война, женските бунтове и политиките на женска еманципация
“Give Us Our Men, Let Them Come Back Home, And They Will Give Us Everything We Need”: World War I, the Women’s Revolts, and the Policies of Women’s Emancipation

Summary/Abstract: Studying the various forms of women’s political and civic activity during the First World War, the article reveals a different resource of women’s agency (and emancipation), i.e., the affective environment of women’s experience (their pain and their social suffering). Emphasizing the problem of (micro and macro) corruption, a specific social phenomenon that the anger of women made publicly visible, the article also stresses a new process, i.e., “becoming aware of what it means to be a woman” and “what it means to be a man” (beyond the horizon of defined gender roles). The author reveals why it was precisely the anger of women (the poor one’s, in many cases uneducated) that expressed “the horror of their coercive situation showing its face” (M. Duras). Thus, the article is an attempt to rethink the national modern project and certain mechanical and idealistic interpretations (by left-wing and right-wing historians) of the growth of political awareness among new historical subjects: the people, the workers, women. Thus the author emphasizes how the new joint communities of men and women were formed (communities that cut across gender, social and class divisions) in the course of resistance against the threatened ontology – what is in fact just and what isn’t. In this way, the moral boundaries of society were revealed (inasmuch as the fact that those boundaries were being crossed provoked joint resistance against this transgression). Along with this, other boundaries (those between good from evil) became clearly perceptible, and hence, a “new ethical society” became suddenly thinkable (a society in which hunger, bad hygiene and death from social diseases, such as typhus fever, tuberculosis, alcoholism, would no longer be part of the normal order of things). The article attempts to show how it was precisely the emancipation of (ordinary and often uneducated) women from their forced passivity and social unhappiness that contained other views of women about the social world.