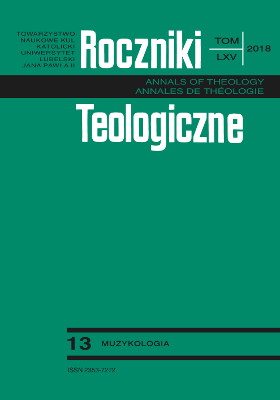 Summary/Abstract: As a liturgical and music book, the pontifical reflects the temporal transformations and so allows us to become acquainted with the register of episcopal functions connected with celebrating the sacraments and sacramentals. The object of the study is a detailed list of strictly musical content of the 12thcentury Pontificale Plocense (Płock Pontifical). The musical layer of this code was revealed through the gleaning of texts accompanied with a melody (over 200 text pieces with added melodies). Sometimes these are single words, incipits, psalm differentiation, and sometimes the musical notation covers the entire liturgical content of the work. Dominated by the cheironomic record of the melody, the manuscript seems to confirm its foreign origin. This notation is especially consistent in the case of the Preface melody. Therefore, it could be argued that the cheironomic record of Pontificale Plocense was imported from a foreign centre.