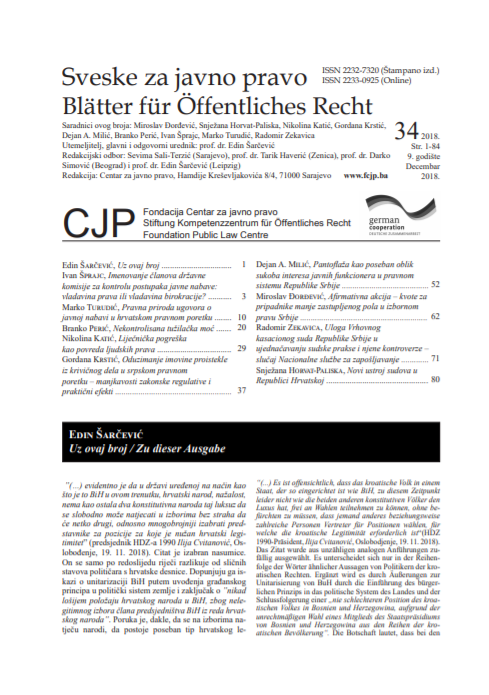 Summary/Abstract: The court plays a very important role in achieving legal certainty. One of the basic ways for it is a consistency in judicial decisions. This means that courts must take into account that the same legal situation must be adjudicated in the same way. This is the basic requirement of formal justice. In modern legal systems, the most important role in harmonizing court practice has the Supreme Court. As the last and also the highest instance in the system of the regular judiciary, the Supreme Court should provide a guarantee against the divergent practice of lower instance courts. This is the case with the Serbian legal system in which the Supreme Court has a legally declared obligation to harmonize court practice. The normative solutions that Serbian legislation foresees on this occasion are the subject of numerous criticisms. They concern, first and foremost, the role of these court in harmonizing the jurisprudence within its jurisdiction outside the trial, by answering to the controversial legal issue and by taking general legal attitudes. On this occasion, the criticism was addressed by relevant expert and consultative bodies, such as the Venice Commission and the Consultative Council of European Judges. The practice of the European Court of Human Rights also stand in a similar position. All this clearly indicates that the normative framework for harmonization of court practice in the Republic of Serbia, in particular the role of the Supreme Court, is not in accordance with the international standards and practice of the European Court of Human Rights. What consequences these legal solutions might have in practice can best be seen in the analysis of specific court proceedings. A representative example is a judicial proceeding between citizens and the National Employment Service. After several years of judicial practice in which the courts adjudicated in favor of the citizens, there was a change in the method of adjudication, based on the Supreme Court's attitudes that he had taken on disputed a legal issue, relevance for deciding in this dispute. The Supreme Court's attitudes, led the courts to adopt different decisions in identical legal matters on the basis of these attitudes which does not formally oblige them. This practice leads to serious disruptions within the legal system and loss of citizens’ confidence in the judicial system, due to the increased degree of legal uncertainty that is being encouraged in this way