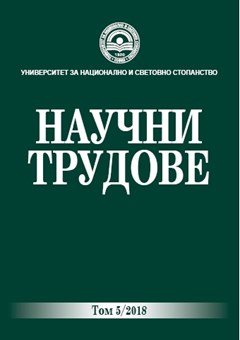 Summary/Abstract: The aim of this paper is to study the yearly dynamics of the main indicators for higher education in the EU and in the EU member states in the 2003-2016 period. In particular, this piece of research is focused on the differences in the level and dynamics of the following indicatrs: the share of students in tertiary education, the share of the population with higher education and share of government spending on higher education. A comparative analysis has been carried out along these indicators in terms of gender and knowledge area. By using cluster analysis, the EU member states are classified into uniform groups along the four selected indicators at the start and at the end of the studied period. The differences in the groups are analyzed. Even though Bulgaria has reached the EU average in terms of the share of students and other indicators, the country ranks among the worst performers in the EU with regard to government spending on higher education. The results of the cluster analysis confirm that, compared to the EU average, Bulgaria and Romania are still lagging behind in public expenditures on higher education as a share of GDP and as per capita GDP.