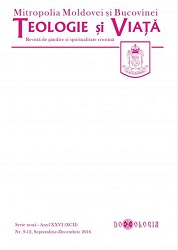 Summary/Abstract: The interreligious dialogue is not a new theme in the history of Christianity, the possibility of its realization being analysed from the early centuries. Nowadays, the way that other religions are viewed has changed essentially, the religious, political, economic and social realities, being completely different than in the beginning. However, a correct handling of interreligious dialogue cannot disregard the past, more than that, the ideas from the works of the Holy Fathers, church writers, theologians and old thinkers remain valid and are used as themes in the current discussions of the interreligious dialog. Among them, an important place takes Cantemir, the Prince of Moldavia, who lived for a long time in Constantinople. His works, which deals with the history of the Ottoman Empire and the Islamic doctrine, have their basis in the personal experience and in the depth knowledge of the main Islamic sources that helped him to give to posterity the representative works for the knowledge of the Muslim religion and relations between Christianity and Islam during the development and decay of the Ottoman Empire. The way he presents the relation between Christianity and Islam, approaches him to the other Christian writers of his time which are addressing the same topic, highlighting the sadness of an era in which the great Christian empire fell under Ottoman rule and also the hopes of the Orthodox worldwide Christians to release the Christianity, having central the idea of approaching the apocalyptic time when Christianity will triumph.