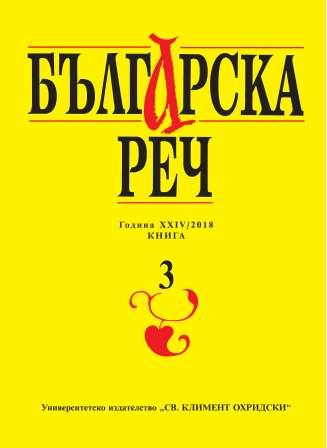 Summary/Abstract: This is the third instalment of a series of lexical notes published in Bŭlgarska rech. Note No. 5 deals with the expression of overlapping meanings ‘at all times, on every occasion’, ‘all the time, continuously’, ‘forever, eternally’ and ‘since time immemorial, since the dawn of time’ throughout the history of Bulgarian. In note No. 6 the author presents a hapax legomenon in the vernacular togazi version of the homily On Ascension by Damaskēnos Stouditēs that has been omitted in the recent Dictionary of the 17th-Century Written Bulgarian Language on a Vernacular Basis (2012). The word skrada was inherited in the vernacular version from an archaic Sredna-Gora version of the text in which it translates Greek στία. The use of this relatively rare word with no basis in the vernacular by Bulgarian 16th- and 17th-century men of letters sheds some light on the level of education in the traditional literary language that was characteristic of these centuries.