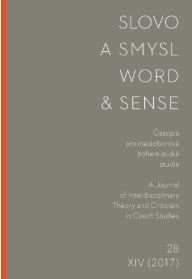 Summary/Abstract: Even though the anthology Jewish Names, often called the beginning of Czech alternative culture, was published in 1995, several central questions concerning this seminal collection from the early 1950s remain unclear: Who initiated it, when was it assembled, and what is its connection with the causa of the ‘Trotzkyites’ in Prague and later anti-semitic show trials? Answers can be found if one appreciates the pivotal role of Honza Krejcarová in this unique project. The article connects dots between Czech history during the Protectorate when young Honza witnessed her mother Milena Jesenská’s resistance activities, and the late 1940s of Stalinist Czechoslovakia when the State Security started surveilling and persecuting Krejcarová. Based on archival studies the article argues for the parallelism between secret service practices (interrogation, the revealing of names in the form of denunciation) and automatic surrealist writing techniques. Drawing on the example of the name of the Author it analyses the paratextual structure of the anthology connected to its literary models, mainly from France. Jewish Names is a rich collection of fictitious ‘Jewish’ pseudonyms attributed to real Czech writers, stressing the vulnerability of the literary intelligentsia, their mineurité. And it is this paratextual construction which can be considered as the most daring and auto-referential aspect of this illegal publishing project. The article reveals problematic aspects of the chosen path of pseudonymy and anonymity. Changing or omitting one’s name is a common trait of female biographies, complicating the attribution of authorship. The article shows how pseudonymy takes its toll on an existential, gender, political, and historical level — precluding until today the proper names from entering Czech literary history.