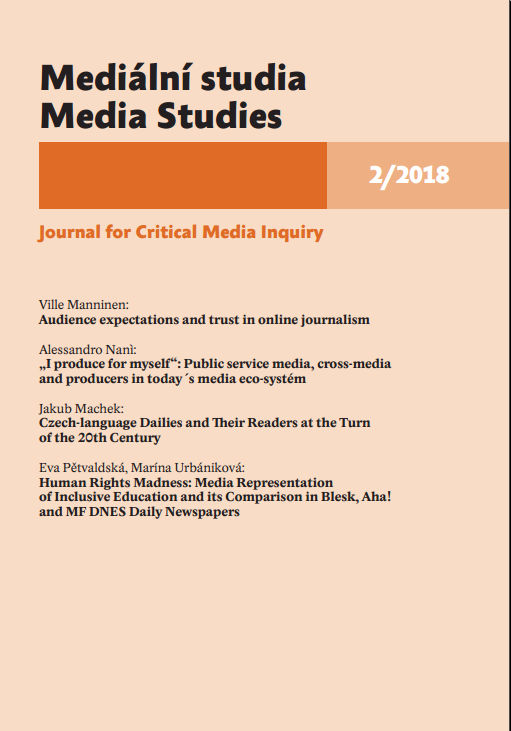 Stratifikace pražských českojazyčných deníků a jejich čtenářské obce na přelomu 19. a 20. století
Stratification of Prague Czech-language Dailies and Their Readers at the Turn of the 20th Century

Summary/Abstract: At the turn of the 20th century, the Czech lands and its centre Prague saw arapid developmentof the newspaper market, thanks to the gradual expansion of election census, growth of urbanpopulation and improvement of its economic situation. The research is based on aquantitativecontent analysis of the best-selling Czech-language dailies published in Prague in 1898 and1908. They can be divided into three categories. The first category are newspapers Národnílisty and Hlas národafocused on readers of higher social status, who could be classified main-ly as bourgeois or middle-class. Their model reader searched for in-depth reports of politicalevents and economic situation. The second category consists of dailies of the socialist parties,Právo liduand České slovo.They offered mostly partisan news supplemented with commen-taries and reports about life of underprivileged people. It came closer to the sensational news-papers after the turn of the century. The readership community consisted of more skilled work-ers, small craftsmen, traders and, in the case of the České slovo, lower officials. Among thesetwo groups was sensational newspapers – the best-selling Národní politika, with the leastemphasis on political news, with strong interest in local news, sensations, entertainment, andthe greatest focus on activity of clubs and societies. The nucleus of its widely distributed readercommunity can be found among the members of the middle to the lower middle-class, al-though its overall audience was probably much wider. Pražský illustrovaný kurýrwas simi-larly focused, but its main attraction were alarge spectacular illustrations and sensationalcontent, celebrity news and recreational content such as fiction and quizzes. Typical readersof Kurýrcan be seen as acertain transitional stratum, with an unclear, unstable social status,economically on the level of better-earned skilled workers and craftsmen, but looking up tothe middle class habitus.