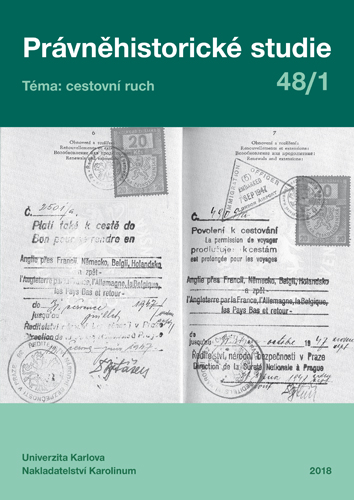 Summary/Abstract: The essay describes the normative analysis of regulations connected with travels abroad from Austria-Hungary and Czechoslovakia from the middle of the 19th century until 1989. It shows, that the second half of the 19th century, the liberal era, was a period of unlimited freedom of movement between states. This era was terminated at the beginning of WW I. After WWI the freedom of movement was restored in Czechoslovakia, but various restrictions remained partially in force throughout the whole inter-war peri- od. During WW II, naturally, international travel for private purposes was not allowed. After WWII freedom of travel was not restored in Czechoslovakia, but the restrictions differed in various periods culminating in the years 1949–1953, when Czechoslovak citizens were forbidden to travel abroad for private purposes at all. Freedom of travel was fully restored on 4 December 1989.