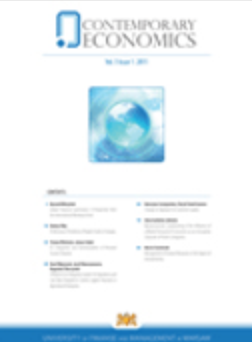 Summary/Abstract: The European post-communist countries that have integrated into the European Union are emerging market economies. However, their short-run economic performance does not correspond to the observed business cycles of other global emerging markets. The business cycles of the studied countries are longer, and their recessions are more pronounced. Moreover, economic activity in the studied countries is relatively low and volatile, and the trade balance and government purchases have a relatively significant counter-cyclical character. These are the core conclusions from our business cycle study of the chosen European post-communist countries. In the study, we use both traditional and contemporary business cycle definitions. Using traditional definitions, we determine the peaks, troughs, expansions and contractions and quantify the duration and amplitudes of their expansions, recessions and business cycles. Using contemporary definitions, we measure cyclical properties by computing the first and second moments of the chosen macroeconomic cyclical components and growth rates. Differences in the business cycles and characteristics between European post-communist countries and other emerging countries are discussed with reference to the works of other authors.