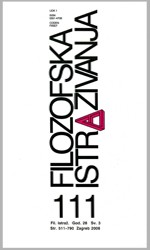 Summary/Abstract: Blaženka Despot should be regarded as an extraordinary person among all Praxis’s contemporaries, because she was concerned with the same themes, although she did not belong to the group, neither formally nor conceptually. She, like the philosophers closely associated with Praxis (where she used to publish occasionally), harshly and without pity criticizes the so called “socialist reality”, but goes on even further to examine and rethink the conceptual foundations on which it is based, as well as its quality, range and truthfulness of the whole project. Therefore, Hegel and Marx lie in the very centre of her interest – the differences and similarities between them, and their limitations and insufficiencies regarding the historical context of our times. Putting effort into the philosophical analysis of social phenomena (in an anthropological- sociological discourse), she puts “socialist reality” and the ideas of its Marxist role-models side by side. Thus, she “re-reads Hegel”, and thereby also unavoidably Marx, in the context completely neglected by both “socialist reality” and the entire history of ideas – in the context of humanistic emancipation of women. Opening that theoretic-philosophical field of investigation, Blaženka Despot follows the world trends in theory, including also dealing with the philosophy of feminism, where she left an indelible mark concerning her efforts to deepen the “philosophy of freedom” and to establish feminist philosophy in Croatia.