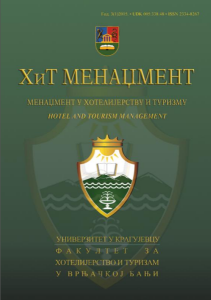 Summary/Abstract: Biodiversity as an overall diversity, disimilarity and variety of both the living world and inanimate nature, which they are a part of, since its beginning until today has been an inexhaustible inspiration for life and arts. Consideration of cultural aspects of biodiversity leads towards the evaluation of priceless value of the nature. The importance of considering the biodiversity cultural aspects was as early as in the 1990‟s interpreted and emphasized through an international document entitled "Convention on Biological Biodiversity”. In the very first few paragraphs of this document the cultural aspect of biodiversity is referred to as a commitment of the signatory countries to take an integrative approach to the inclusion of economic and socio-cultural aspects of biodiversity conservation on route to the sustainable development. The importance of biodiversity, apart from fundamental and applied reasons, can be viewed from the creation of man to the present day through art, culture and tradition. This paper aims to highlight the importance of biodiversity and its invaluable participation in creating the national traditions and harmonious relationship with nature, inspiration for artistic creativity, as well as the direct influence of the nature on shaping people's beliefs and customs. The special focus of this paper will be given to the art whose main inspiration was the nature with its supreme harmony, distinctiveness and uniqueness among other entities. Biodiversity is the ultimate wealth of a country, with general, economic, social, cultural, aesthetic and ethical importance. Many nations worldwide are traditionally using elements of biodiversity. Knowledge of general variety and diversity of the living world and nature in general can be considered as the level of civilization development and the degree of cultural development of a country. Comprehensive understanding of the interactions between biodiversity and culture aims to achieve a symbiosis between biological and social systems, in order to achieve a sustainable future both for humanity and nature.