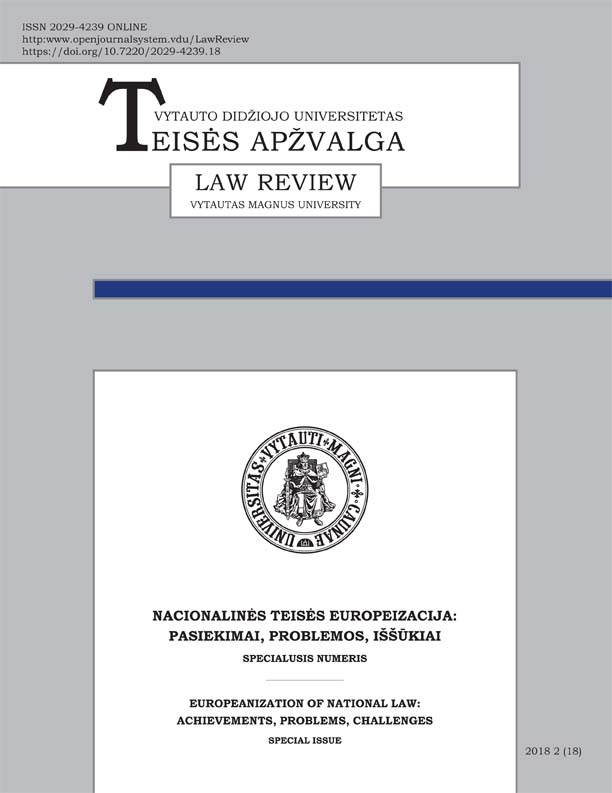 „Teisė į viltį“: Europos Žmogaus Teisių Teismo doktrinos (r)evoliucija
“The Right to Hope”: The (r)evolution of the Case-law of the European Court of Human Rights

Summary/Abstract: The article deals with the case-law of the European Court of Human Rights (ECHR) on life imprisonment. In the landmark case “Vinter and Others v. the United Kingdom” (2013), the Court’s case-law underwent a radical turn. The article deals with both prie-Vinter and post-Vinter developments and exposes the revolutionary nature of the change, as well as what may be seen as some inconsistencies in the Court’s post-Vinter case-law. Still, despite some zigzags, in the post-Vinter era violation of Article 3 of the European Convention on Human Rights is usually found in cases, where the persons sentenced for life are not effectively entitled, both de jure and de facto, to the prospect of review of their sentences with the eventual possibility of their commutation or other forms of early release. This prospect is subject to conditions; the corresponding legislative instruments must be in place, but they do not guarantee per se the said commutation. However, the denial of that commutation and the continued isolation of such persons from society must be based on legitimate penological grounds, as expounded in the case-law of the ECHR. In that case-law, the life prisoners’ right to have their sentences reviewed is called the “right to hope”. It is grounded in the society’s hope (not necessarily realistic) that even those who commit the most abhorrent and egregious acts nevertheless retain their “essentialhumanity” and carry within themselves the capacity to change; therefore to deny them the experience of hope would be to deny a “fundamental aspect of their humanity”; and to do that would be degrading. On the other hand, the probability that the penological grounds for continued isolation of such convicts would be deemed, by the reviewing courts, as no more present, is not high. The Court’s post-Vinter case-law focuses not on the factual or legal situation of actual applicants in concrete cases, but, first and foremost, on the quality of the law. Consequently, violations of Article 3 are being found also in such cases, where the applicable domestic law is still based on the much more lenient (to the States) pre-Vinter case-law. As things stand today, there are no indications that the Court would be prepared going to abandon this quasi-constitutionalist methodology (even if its use legitimately poses complicated analytical questions as to when and how, and by whom the respective violations had been committed). This new principled stance of the ECHR makes the outcome of the pending similar cases rather predictable – and unfavourable to those States, which have not (yet) introduced legislative instruments allowing for the judicial review of life prison sentences with the prospect of their commutation. Therefore, it is not surprising that in response to the said transformation of the Court’s case-law, a number of States have introduced, in their legislation, the possibility of judicial review of life sentences upon expiration of no less than twenty-five years (the term which the Court sees as an acceptable standard). Lithuania has not done so yet (for reasons which are hardly explainable); in this country, life prisoners’ early release is possible only by way of presidential pardon or on compassionate grounds – both options, whatever their merits, fall short of the post-Vinter requirements. In 2017, this resulted in ECHR finding, in respect of six applicants, of a violation of Article 3 in “Matiošaitis and Others v. Lithuania”. The Article argues the necessity and desirability of the relevant legislative changes, as well as their inevitability, in particular in view of numerous new complaints pending before the Court against Lithuania.