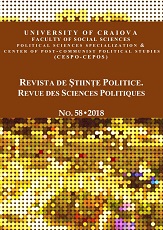 Summary/Abstract: The new century with the dynamics of international relations has challenged theories, as it called Popper ‘strict universality’ and the need for ‘numerical universality' theoretical explanations. In the twentieth century, theories of international relations developed, but these theories are in the battle with explanation changes rather than expanding the theoretical framework. The need for new explanations doesn’t reject old theories, only requires their axioms to be more inter-theoretical and with new variables that explain the course of the deliberate actions of state actors to the intended purpose. So this theoretical change and the acquisition of some realistic axioms, by adding inter-theoretic variables (pragmatism, foreign policy analysis, offensive realism, and defensive realism), sends us to a theorization we have called “spider diplomacy”. Almond in the 1960s considered that “with the decline of the norms and traditions of political sciences, the need for political theory and theories has increased”, where we find the same situation today for explaining the new geopolitical and geostrategic circumstances.