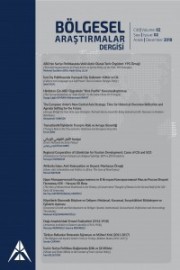 Summary/Abstract: Donald Trump’s evaluation of NATO as “an obsolete organisation” following his election as the President of the USA initiated a discussion on the future of NATO and Transatlantic relations. Subsequently, it was claimed that Permanent Structured Cooperation was formed as an alternative to Trump’s elucidations and NATO. In accordance with these developments, the study examines NATO’s transformation after the Cold War, the conflicts between the USA and Europe, defence expenditures of NATO members, increasing anxieties resulting from the election of Trump as well as the initiatives regarding European security, and evaluates the future of transatlantic relations.